This article was published originally by me on Indie DB.

Hi, today i want to show you the process behind the creation and implementation of Mr. Good Looking's starting weapon, the Magun.

The Magun is the weapon used by Kaze on the very obscure (and old) anime Final Fantasy: Unlimited (FFU) 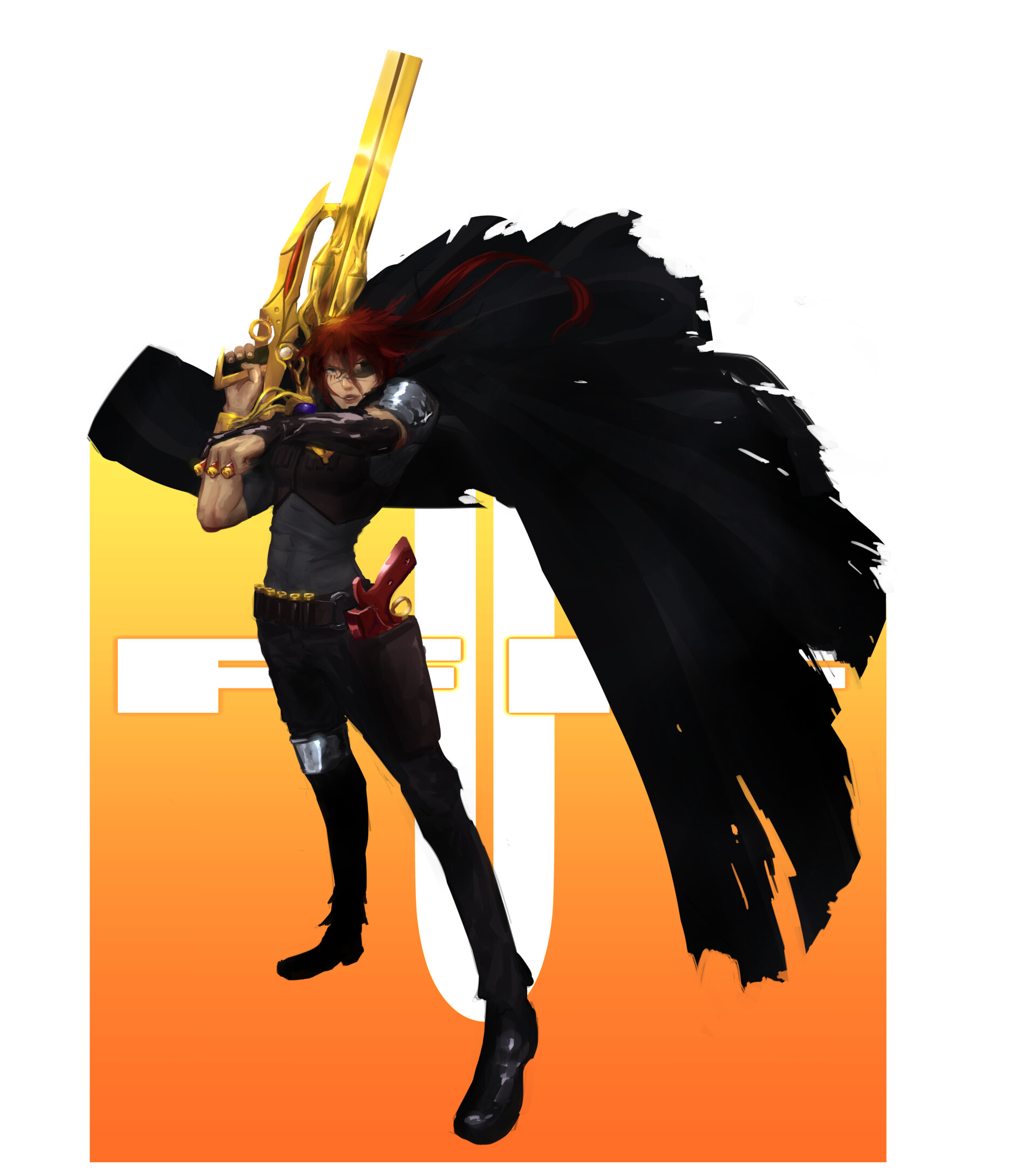 In the anime the act of loading the cartridges is an event (the firing of the weapon is his ultimate move), he calls all three different cartridges by a color and an adjective (Eg. Mother black, Burning gold, Magic Violet...) before loading them into the weapon chamber. When the Magun is fired, the three bullets combine after flying some distance resulting in a summon directly related with the type of cartridge used. Yes, the Magun is a very weird summoning wand.

The Magun (in the game) is a triple barrel rifle, that has two firing modes, single shot and triple volley (aka triple shot). It can use two types of ammo, energy (stored inside the chamber and used on the single shot) and life essence (the cartridges glowing blue, used on the triple volley).

The ammo collected, either from the level or after switching characters, is used on the primary fire, using one bullet per shot. The secondary fire uses 15hp and deals significantly more damage to the enemy, basically one shooting weaker enemies, after firing there’s a reload animation. 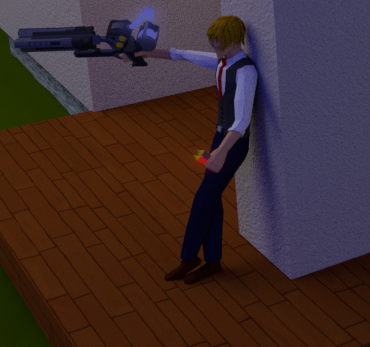 This is my first attempt to make my version of the Magun, this was a very big pistol as mirroring the anime, weirdly enough this character has nothing to do with Defiance nor Mr. Good Looking, when i made this image i had no knowledge on game development, i just found (and still find it) vests and suits very cool, i blame “How i met your mother” for that. 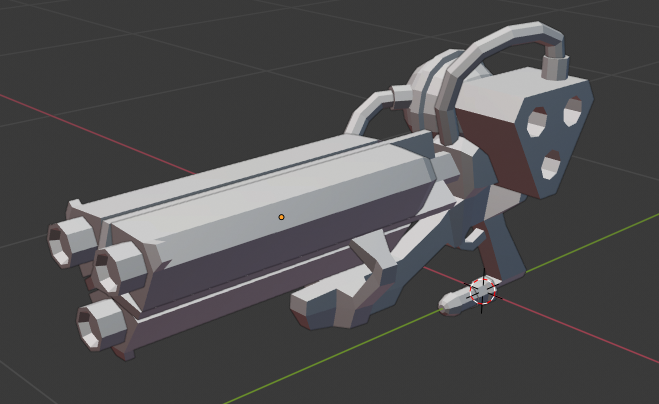 This was the second attempt (i have a render of this, but i couldn’t find it), this was used on my previous project “Prototype hunter” which i never finished, i also used it on the prototype phase of “Defiance & Mr. Good Looking”, at that time the character even had hands! The character used it one handed, the mdoel itself was just weird, after trying hard to find a comfortable wielding position for it and not finding it I discarded the model.

The third and current version is this one, i threw away the concept of this beast begin a pistol, it evolved into a shotgun and after that a rifle, the handle looks weird for a plot reason, this weapon is fired using the middle finger, if you play the game and check Mr. Good Looking’s model, his middle finger is on the trigger.

First i need to establish some mechanics of the game: you play with two characters and can switch between them at any time, killing an enemy does two things:

The Magun was revised A LOT! Here’s the important stuff:

At first, it had a very high spread and a lot of ammo, the single shot, the triple shot and the idea of playing with two characters were already in place on the game, but not the mechanic of “one character healing the other”. At first I tried to implement a type of chainsaw kill (lifted from Doom (2016)), the third fire mode of the Magun would be a slow projectile that stun enemies, switching to Defiance and hitting the enemy would recover Ammo for the weapon. This didn’t work out, it was too confusing, especially with more weapons added.

Ok, the healing and ammo recovery with the character switching was in place, but it raised a problem:

-What if Defiance was dead and Mr. Good Looking had no ammo?

-Make the weapon have infinite ammo!

It looked like a very good idea... It didn’t work, it was hard to balance and the player could make a backwards march while mindlessly holding the trigger, I didn't want that.

This was good, the weapon had a big magazine, the secondary had a cost of 3 ammo. When i got to a more complex level (Windy Express) it needed so many pickups that the mechanics around switching characters got on the second or third plane, the problem from before could happen very easily if i didn’t account for pickups in every area, adding to that: new weapons are never handed to the player, they are hidden in secrets (to reward exploration) so more pickups were needed and the player could have no use for them if he hadn't explored the level or the previous ones very well. The opposite could also happen, the player could get to that level with two weapons, and could use the various kinds of pickups, trivializing some encounters. Balancing was boring...

It uses ammo and health

We’re almost solving the ammo crisis here, the magazine was shrunken to make the player switch weapons often, but this was not the end. The weapon only used HP when the magazine was empty, basically it extended the magazine a bit, but there was no player choice, I considered making the firing modes switchable, but it was too weird.

That’s the point, that’s good, fire it away, the Magun holds a good amount of bullets (18 to this moment, i added tw more from Doom Eternal shotgun). The enemy is “too spongy”? Use 15hp to give a triple shot on his face. The weapon is simple and versatile, the amount of health packs and the healing ability provided by Defiance makes the secondary shot viable, the sustained fire of the primary fire makes it relevant throughout the game.

The weapon was the belt-fed machinegun from Rambo at the start and at the end it was connected to the character's veins.

Nothing is perfect, so i cheated a little with these two passives, to give the finishing touches:

If the player has less than 15hp (the cost of a triple shot) when using the secondary, his hp will reduce to 1hp, instead of killing him instantly, the next triple shot at 1hp however, is fatal, but if he heals to at least 2hp the passive can be activated again. This makes the magazine longer but there’s a lot of risk involved.

If Defiance is dead the triple shot never kills the player (not even if he’s at 1hp when using it), when Defiance is revived this passive no longer applies. This makes sure that the player never runs out of attack options and gives the idea of the last effort to help a friend.

After a lot of work the end result is quite good, it's a versatile weapon, it goes pew pew when needed and boom when necessary. If you want to check out the result of this long thought process check out the game's Alpha . The game is available here and on Game Jolt

Fast-paced FPS where you play as a Gunslinger and a Swordsman, switching between them to manage resources